Super efficient or simple and fast to produce? Complex and packed with features or delivered without a large budget? Before we attempt to build a mobile app, we need to consider what type of application will be the best in terms of our business situation. Hybrid or native—what’s the difference and which one should we choose? 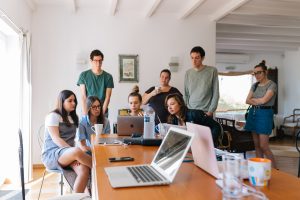 They have become such an inseparable part of our everyday life that we no longer even try to imagine a world without them. We use them to communicate privately and professionally, organize tasks, make money transfers, invest savings, make purchases, listen to music, avoid traffic jams, check the weather, make decisions—from minor pleasures to the most important ones. Mobile applications became a permanent part of our lives. No wonder, then, that they have become a business goal and ambition for many companies and start-ups.

3.7 billion users around the world

For the past few years, we have been reading and hearing about the era of mobile devices and how they change the behaviour of users on the Internet. As we learn from the document “Mobile internet usage in the United States – Statistics & Facts”, in the United States alone it is estimated that the number of mobile Internet users will increase from 237 million (as of 2017) to 275 million in 2022.

What is the situation around the world? Data from the beginning of 2018 indicates that the global “mobile” community has already reached a level of 3.7 billion unique users! A year before that, it turned out that almost half of the global traffic on websites is generated by smartphones and tablets. Interestingly, the top countries with the largest share of users browsing the Internet on mobile devices are African and Asian countries such as Kenya, Nigeria, India, Singapore or Indonesia.

Since we already know that desktops are going on the defensive under the pressure of mobile devices, we also know that the fight for the hearts of our clients takes place on the battlefield of applications.
So what is a mobile app? In simplest terms—it is an application that we can run on our portable devices. Although we are slightly bordering on a cliché, mobility is the aspect of user experience that we must never forget about.

Applications are created to be used on the following platforms

What types of mobile applications are there when it comes to developing them? 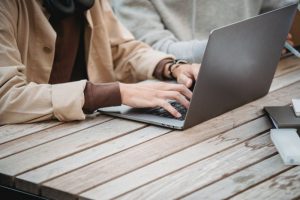 In addition, features of progressive applications can be used offline. This solution is dedicated to companies that previously operated on their websites and would like to acquire mobile users using said websites.

It is a typical mobile application written in a specific language for a given operating system. It allows developers to flourish. Programmers program all the features of the application, so they can build complex and ambitious products, not having to keep their creativity in check.

Nativity opens the door to high performance, which is useful, for example when writing games. However, we must note that the market is growing and provides us with tools to create solutions for many platforms. If, however, we would like to write code for each platform separately, we have to face the fact that it will be expensive and time-consuming when it comes to production and operation. Let’s add maintenance and further development of this application which also won’t be cheap.

The advantage of this approach is full access to the components of the phone. If our goal is to create an app that uses the resources of the phone in an unusual way, then a native application can be a sensible solution.

Giants such as Facebook, Instagram, Tesla, or Airbnb use this approach. A hybrid uses the full range of technologies used to create web apps, and at the same time has access to the phone’s features just like a native application.

In practice, we’re building an application using one technology, e.g. JavaScript or .NET, but the tools we use allow us to create apps for many platforms.

However, the pros of a hybrid don’t end there. Let’s look at the rest of them:

Armed with a hybrid application, we increase the reach of our business offer. A start-up that decides to choose such technology, increases its chances in the fight for the attention of the customer. Why? Because it reaches both Android and iOS users in one go.

OK, our sceptical nature will always look for the shortcomings of a given solution, especially when being flooded with advantages. How does it look like for a hybrid application? Critics mainly point out two issues. Are they right?

Native vs Hybrid – what to choose?

What will happen if we put these two approaches to the production of applications against each other? Which technology should we choose for our business purposes?

First of all, creating a hybrid application is much faster than building a native one. A hybrid requires us to learn only one tool and to have knowledge in the field of JavaScript and HTML, which are typical web tools. As we have already emphasized before, once written, the code results in an application that immediately runs on both operating systems.

Another difference is that a hybrid does not have access to all the complicated features of the phone. However, the programmer can freely add plugins that easily handle the features offered by native applications.

Usability, performance, and aesthetics are undoubtedly very important features that we expect from our future application. Native technology handles them much better. Speed and fluidity are the most important aspects for both large, complex applications and mobile games. A hybrid, however, works well for smaller applications.

The opponents of hybrids like to accuse them of being slow and inefficient, but this problem has gone away with the advent of a new generation of smartphones and subsequent versions of operating systems. There are also extensive hybrid applications that work fast and without lags. The abilities of programmers are more important than any predefined features of a given technology.

It’s time for a decision…

On the other hand, a native app will be a better solution if:

… and for the implementation!

At GMI Group Software House we focus on agile development of hybrid and progressive applications because we know how important it is to optimize the time and costs involved in production.

We also know how important it is for a business to save time and release an MVP version which can then be improved.

A great example of our implementation achieved with the hybrid method is the Delivioo app!

Ready for the first step? Order a free quote for your project today!

The 4 Steps for Building Microservices Architecture